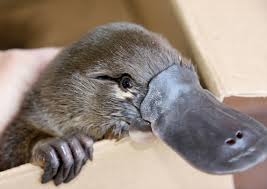 Genesis 1:26  “Then God said, “Let Us make man in Our image, according to Our likeness; and let them rule over the fish of the sea and over the birds of the sky and over the cattle and over all the earth, and over every creeping thing that creeps on the earth.”

It has webbed feet to help it swim.  But it only uses its front feet when it swims.  It tucks its back feet in.

When it walks it walks on its knuckles to protect those webs.

It lays eggs like a bird or a reptile.

It walks with its feet to the side like a reptile.

It has no nipples.  Instead the female sweats its milk onto its chest where the young lap it up.

The male has talons on its back legs like a bird.

It has eyes, however, in the millions of years of “evolution” it “opted” to close those eyes when it hunts. 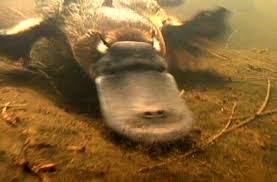 As luck would have it this creature developed an electro-location system for finding its prey that is exquisitely precise.  It developed that system over millions of years through miniscule changes provided by totally random mutations that in and of themselves had no advantage yet hung around in each succeeding generation and just randomly kept improving until it reached perfection.  Yet in those millions of years it didn’t starve because….. because…. because…. well it would be better if one of your evolutionist friends explained that.  I’m kinda thinkin’ it would have better off using its eyes.

You already know this little misfit is the platypus.

Here is a fun video on this little fella.  At the end of the video the narrator is going to “splain” how this guy evolved.  Meet me on the other side of the video because I want to discuss that explanation.

Here’s how the platypus evolved.

A.  There used to be a lot of monotremes in Australia.

B.  There were “platypus-like” creatures in the fossil record 61 million years ago.

Actually they were intact platypuses.  They just had teeth.

C.  There was a really big platypus that was discovered.

What it was was a really big….. wait for it…… platypus.

D.  They took to the water when the marsupials arrived.

So this explains how the platypus changed from a big one with teeth to a smaller one without teeth.  I’ll buy that.

What it doesn’t even attempt to explain is how the heck an animal came into existence that has fur, a duckbill, a beaver tail, venom, lays eggs, sweats milk, walks like a reptile and on its knuckles no less, and has an electro-location mechanism to locate its prey.  Where are the common ancestors for that?!

I’m guessing it was the yet to be discovered mamphibirdtile.

But hey, they don’t have to keep looking because the friendly narrator lady “splained” everything……. And with a smile no less!

The platypus is unique.  It looks like a bunch of things put together.

You are unique as well.

You were made in the image of God.